The Economic Impact of the Port of Savannah 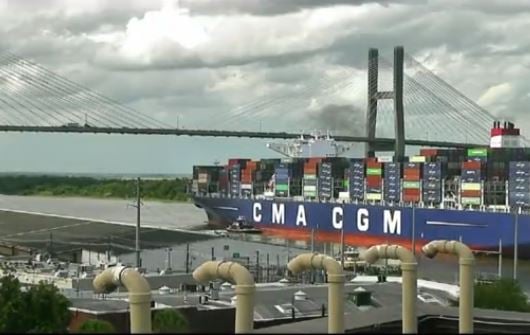 Those container ships you see coming up the Savannah river look gigantic, but wait until you see the size of the New-Panamax ships that will steam upriver after the harbor expansion project is complete. If you counted the number of shipping containers on the current Panamax vessels, it's no more that 5,000. New Panamaxers carry up to 13,000. A fully loaded ship of that size needs a deeper channel.

The Port complex here in Savannah sees about 5 and half million containers pass through, going to destinations all over the globe. By 2028, that number will climb to over 8 million. So what's the impact of all that traffic on our economy?

Case in point is distant Cobb county. A suburban Atlanta location some 250 miles distant from Savannah, the county can attribute almost 28,000 jobs to the activity of the Port of Savannah. That serves to provide a selling point for Atlanta-area Chambers of Commerce when attracting business region. And that's just one corner of the state of Georgia that benefits from the facilities here in our hometown.

We're already known as the busiest port on the east coast and there are ambitions to do more. The Savannah Harbor Expansion Project (SHEP) is a joint effort shared by the Army Corps of Engineers and state funded contractors that aims to grow capacity in ways that will make importing and exporting through Savannah better, faster and cheaper.

The Appalachian Regional Port near Chatsworth features a direct rail line from the Port. As a distribution center (DC), cargo from the port gets unpacked, loaded on trucks and carried off to other DC's in the Southeast and Midwest. The opening of the rail line eliminates 50,000 truck trips per year and speeds up the distribution process.

Exports follow a reverse pathway, making their way to the Atlantic Ocean through the corridors used for incoming goods. The Appalachian Regional Port's capacity will double in the next ten years with the completion of SHEP.

Even students at technical schools like Cobb County's Chattahoochee Tech stand to gain. As manufacturers look into locating along the I-75 / I-575 corridor, they're also looking for skilled labor to run operations, and Chattahoochee Tech is gearing up to supply those workers.

As the cost of SHEP soars to almost a billion dollars, no one is batting an eye.

It's been well established that every dollar spent on the project will return more than seven to the local and national economy.

Port City Logistics is right in the middle of it all! We're excited to provide support for the growth of the Port of Savannah without complete, single source logistics solutions. Importing or exporting, call us for details on how we can earn your business.