This is a fascinating period for the trucking industry. Momentum is undeniably building in domestic manufacturing. Who will drive those manufactured goods remains to be seen; driverless trucks promise to change the dynamics of the industry in almost unimaginable ways. Across the trucking world, change is right around the corner... except for the literal corners.

When it comes to transporting goods, America's biggest traffic jam is in Washington DC. 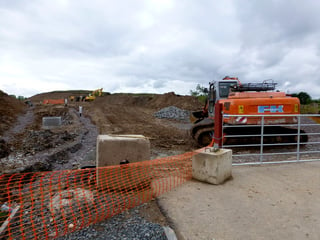 alwayspopular, netting between 75% - 80% in almost all polls. Theoretically, there should be bipartisan support for such a popular governmental initiative, yet infrastructure spending remains static. The United States has fallen down to 16th in the world in terms of infrastructure.

Americans are routinely polled on a number of topics, and increasing infrastructure spending is

No relief appears to be in immediate sight, either. Congress cannot seem to agree on the color of the sky, let alone how to spend money. Government inaction is not just frustrating, it is costing trucking companies actual money.

If you are a Savannah trucking company, how much traffic time do you need to account for? It's roughly 248 miles from Savannah to Atlanta, but getting into town requires leaving at odd hours to avoid traffic slowdowns. The Texas Transportation Institute estimated that Americans spent 5.5 billion hours in traffic, wasting $120 billion worth of fuel. Delays might cost trucking companies up to $7.5 billion a year.

Traffic causes delays, and those delays cause disruptions to supply chains and logistical considerations. American retailers and manufacturers simply cannot afford to hope that things get where they're supposed to be when they're supposed to be there. The National Economic Council estimated that US businesses spent $27 billion a year on keeping extra supplies and extra distribution centers to smooth over supply disruptions caused by traffic.

3. The cost of poor roads

Every year, roughly 33,000 automobile fatalities occur in the United States. Of that, an estimated one of three (11,000) are due to poor road conditions. That is an awful lot of lives lost. Besides the moral cost of poor roads, these fatal accidents drive up the cost of auto insurance. A California non-profit estimated that poor roads might contribute up to $2.5 billion in insurance costs -- auto insurance. Further insurance costs for shipping and transportation of goods only increase the cost of insuring a trucking fleet, sapping profits every single month

In his highly cited academic paper, "Is Public Expenditure Productive?" David Alan Aschauer demonstrated that for every $1 dollar spent on infrastructure, the economy could recoup the full $1 dollar back. That would be little more than a fun fact if it were a simple $1:$1 ratio, but it is not. Since Aschauer's paper, it has been shown that the $1 of expenditure (infrastructure investment) might spawn $1 in productivity every 3-5 years. In short, every $1 investment might help trucking companies earn an additional $1 worth of profit every 3-5 years. Infrastructure investment could mean literal money into shipping companies pockets, not out of it.
At this point, even immediate action is unlikely to pay immediate dividends. A shipping company in Savannah is likely to face some serious challenges if road improvements are implemented, as delays would lengthen deliver schedules and increase fuel costs. Still, once a few rounds of infrastructure improvements are implemented, the long term gains would be well worth the short term issues.

Until Washington can get things on the right path, however, infrastructure will continue to crumble, slowing shipping profits in its wake. Hopefully that traffic jam in DC will clear up soon.