Of the thousands of cargo ships traveling the international seas at any given moment, there are only a few different types of ships, mainly divided according to the type of cargo that they carry. The two main types are dry cargo ships or tankers. Among dry cargo ships, different types include bulk carriers, container ships, reefer ships, RoRo ships, and others. Tankers can be classified as chemical, gas, LNG, or oil tankers. The cargo ship port of Savannah, GA is the second largest port in the US and handles container ships, reefer ships, heavy lift, RoRo, and breakbulk ships.

Container ships are the most common type of cargo ship used for carrying 20 foot, 40 foot, and sometimes longer intermodal containers. Containers are built to an international standard so they are interchangeable among ocean-going, rail, and trucking companies. Container ship capacity is measured in twenty-foot equivalent units (TEUs) or forty-foot equivalent units (FEUs). The largest modern container ships can carry over 21,000 TEUs such as the Emma Maersk and the OOCL Hong Kong. For reference, the cargo ship port of Savannah has processed up to 3 million TEU in the year 2014 via its Garden City Terminal - the largest of its kind on the Atlantic and Gulf coasts.

Bulk carriers are specially designed to transport bulk cargo such as wheat, corn, mineral ores, or coal, among other things. These commodities are partitioned into specialized cargo holds. Modern bulk carriers can carry up to 400,000 DWT (deadweight metric tons). Most bulk carriers are built in South Korea, who maintain 82% market share in new bulk carrier vessels. Similarly, breakbulk vessels carry cargo that is bagged or palletized, such as cement, sugar, paint, chemicals, etc. 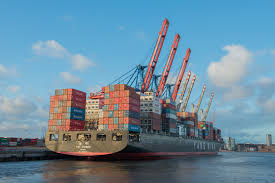 Reefer ships are specialized refrigerated cargo ships, typically used to transport perishable foods such as fruit, vegetables, meat, fish, and dairy products. The original reefer ships in the late 1800s used ice to cool the insulated cargo space. This style had limited success and was unsuitable for long distances or hot climates. Later designs of reefer ships utilized refrigeration compressors that maintained a higher level of temperature stability and range of operation.

Other container ships are able to roll-on/roll-off cargo, similar to a commercial ferry. These are known as RoRo vessels. These vessels are best for transporting cargo on wheels, such as cars, trucks, trailers, railroad cars, and certain large machinery. The cargo ship port of Savannah is well-equipped to handle large RoRo vessels. RoRo vessels require ramps that are either built into the ship or shore-based to allow cargo to be transferred to port storage. The ramps may be located on the stern, bow, sides, or any combination thereof. RoRo vessels have been used throughout history as a temporary railroad bridge, floating rail cars across a river before the official bridge can be built.

Tanker vessels transport liquids or gases in bulk, including oil, liquefied petroleum gas (LPG), liquefied natural gas (LNG), industrial chemicals, water, and even wine. Capacity of these vessels is up to 550,000 DWT for the Ultra Large Crude Carrier (ULCC) ship. Shipping liquids requires additional safety measures to due the Free Surface Effect. If the internal tanks are not sufficiently subdivided, the free flowing liquid could potentially capsize the vessel. The now infamous Exxon Valdez oil spill was an oil tanker that ran aground and released over 10 million US gallons of oil into the Prince William Sound in Alaska.

Among all types of dry cargo ships and tankers, these vessels handle the bulk of international trade. World-wide trade exceeded 680 million TEU in the year 2014. This number can only be expected to increase with emerging economies and global trade agreements being put into place.

If you're overwhelmed by the options when it comes to commercial cargo ships, you're not alone. Port City Logistics is here to make the entire process stress-free for you and your business. As one of the top logistics companies in the southeast, PCL is located at the beautiful Port of Savannah and provides shipping services to companies of all shapes and sizes. Contact us today for your free consultation!